The Jesuit school that’s shaking up the Spanish education system 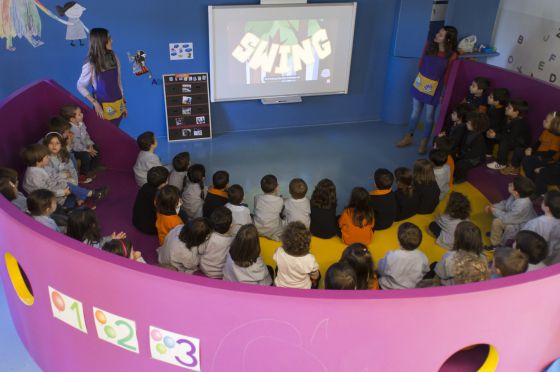 Walking down a corridor in the school, the experiment can be clearly seen in action: on one side there are classrooms with rows of desks where children sit in silence facing the teacher and the blackboard. Across the hallway there are large open-plan spaces with big windows and open doors. There are tables with wheels that the children can move around to make new groups and discuss the tasks they have been assigned. There are also common areas with armchairs, beanbags and a hanging garden they are building themselves. In one room, there is a pistachio-colored stage that becomes a slide on one end. The effect is something like the Google offices applied to a school.

“It’s a lot more fun coming to school like this,” says Bernat, who, along with his fellow 3-year-olds Enric and Albert, is dissecting a cow’s heart. “The teachers explain a few things to you, but it’s up to us to do the work, to research our subjects, to try things out,” he adds, sticking his fingers into the vena cava.

This is what educators call guided discovery learning. “It isn’t that there is no guidance, it’s just that the children are less aware of it, they are more active; similarly, it's not that there's no more books, but there is more than just books… The world is the classroom,” says Porcel, who has spent time in Finland studying the country’s education system, considered one of the best in the world.

Before, you had a class that would last an hour, then another, but with the projects you deal with two or three subjects at a time”

“This project draws on many sources: from Gardner’s multiple intelligences to Scandinavian education theories,” she says.

Although there are still classes dedicated to individual subjects such as mathematics and German, the children set their own pace. And they seem motivated, active, focused – nobody seems bored or distracted.

“It’s more fun and you learn just the same,” says 13-year-old María Solá. “Perhaps not as quickly, but what you do learn stays with you.” Projects last three weeks and children work in groups of four or five. “If you work on your own, you only have one idea. In a group there are more ideas, and so you can choose the best one,” says Sergio Arazo, 13.

“Before, you had a class that would last an hour, then another, but with the projects you deal with two or three subjects at a time,” says Sergio. For example, ancient history is taught through Be Water, Nefertiti, which includes the rain cycle taught in Natural Sciences; the Rappers and Reporters project requires students to record a video clip that includes social commentary using the language of hip hop; this combines English and music. The regional government of Catalonia is overseeing the project, and its education department has already carried out a number of in situ inspections.

The project has seen the school create new, super-sized classes of up to 60 students supervised simultaneously by three teachers from the sciences, languages and the humanities. “The day has changed completely. Before this, you taught closed classes: now our team work sets an example for the children,” says Xavier Solé, who attended a term-long course to prepare for the program. He says he had always wanted to try new approaches, but never had the back-up. “Now I feel supported.” 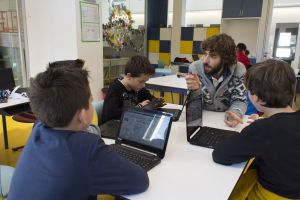 Fifth-graders at Claver with one of their teachers. JAVIER MARTÍN

Magda Ballesta, who teaches three-to-five year-olds, says she finds teaching more creative under the new project. “It’s more work, because obviously it is easier just to give kids things to fill in, and sometimes we do that kind of teaching, but as a teacher I prefer to create my own activities.”

Sociologist Mariano Fernández Enguita highlights the importance of this initiative by the Society of Jesus, a religious order with a long tradition of involvement in education.

“These are the people who, centuries ago, developed the teaching methods that we now see in the traditional classrooms, these are not just anybody,” he says.

Fernández Enguita describes the project in Lleida as explosive. “This is a religious order that is shaking up the Spanish education system, and running rings around the state schools. Conventional schools have to evolve, because they’re based on a world that no longer exists: the Jesuits are already adapting. But there is a lot of opposition in the state sector, and any change is going to require strong leadership,” he writes on his blog, Cuaderno de campo.

“If I were a parent, I would take my child out of that school,” says Felipe de Vicente, president of the National Association of Secondary School Teachers. “This is simply about keeping children entertained… School is for learning. There is nothing wrong with traditional methods. I learned everything I know that way and I successfully passed two public examinations for state positions. Cervantes has to be explained, and Euclides’ Theorem can’t be put into a rap song,” he says, adding that the Jesuits’ approach is not applicable to public schools.  “This can only be done with middle class students,” he says.

Talking to the children in Claver, it’s clear that some at least are happy to continue learning the old way. “They have nicer classrooms, but I prefer the old system,” says one. Another adds: “What? No exams? I can’t believe they’re learning anything at all, and they have the best teachers.”

She has less homework, but if she misses a day it takes a lot to catch up, so they must be working hard in class”

PARENT OF A FIFTH GRADER AT CLAVER

The Jesuits have taken years to prepare for the change, consulting teachers, students and families extensively. “We didn’t need to convince the teachers because they already wanted change, we could see that many were unmotivated because their students' grades were not getting better. With the parents we had to be very transparent,” says Minerva Porcel.

“At first you don’t really understand it,” says Daniel Ponté, the father of a nine-year-old taking part in the project, adding that his daughter works harder now than she did before: “She has less homework, but if she misses a day it takes a lot to catch up, so they must be working hard in class.”

The sun is going down over the vineyards of Raimat, which surround the school: time for the students to gather to reflect on what they have learned. The children think for a minute while relaxing music plays in the background, and give themselves a mark out of four. Then they get up and quietly head out of the classroom, without having to be prompted by a bell.

Tags:
An experiment in Catalonia could be the start of a teaching revolution in Spain