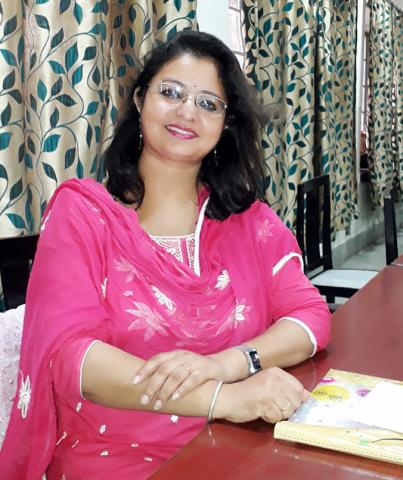 It is a dream of every teacher to be associated with an institution like St.Xavier's School .

It is so because as a Jesuit educator , our strong concern and effort is to aid the development of the whole person so as to be fully human,fully Indian and truely modern . A teacher's personality gets transformed and is open to growth ,becomes intellectually competent , religious,loving and committed to faith and justice . As an individual ,it imparts a sense of our worth and dignity and a respect for the dignity and the rights of others.

My collaboration with the Jesuits started in the year 1990 when I was recruited as an educator to teach the less previleged kids of Balwadi  . It required a lot of patience ,compassion and firm determination to reach out to the hearts of these special kids .Dealing with these kids gave me a platform to improvise myself as I was learning on daily basis .It was the motivation of the Jesuit priests only that kept me going for 3 fruitful years .

In the year 1993 ,I was fortunate enough to get an oppurtunity to join St.Xavier's School ,Jaipur . Joining an institution like Xavier's made me pledge an inner directed sense of personal and corporate responsibilty in collaboration with others,the family,the society ,the nation and the world .After working for a couple of years I realised a great transformation in my personality .There was an attitude of openness to growth .I was prepared to be intellectually more competent and developed a habit of reflection of my own experience.It was all because of the guidance and co operation of the Jesuits .I was acompanied in my personal and professional growth as a teacher.

Under the leadership of Jesuits fathers ,a teacher at Xavier 's automatically begins to establish his/her own identity to move beyond self interest in relationship with others .We, at Xavier 's achieve considerable knowledge of the many needs of the local and wider communities.Over the period of years,all the opportunities given to me to be a member of various committees for example ( Being an X rays co ordinator or organizing the mega xavier fair or co ordinating for Nrityanjali or the kalanjali dance fest or the annual prize distribution day or the sports day' responsibilties given for Organising the feast days of St,Ignatius or St.Francis Xavier  or conducting special assemblies on christmas ) all these duties have boosted my morale and have transformed me into a confident person that I am today .I owe this to the  Jesuit priests .The constant motivation by the priests have empowered me to think like them to achieve the mission with the spirit of Magis.

The staff orientation and educational programs conducted by various Jesuits at different period during the academic sessions  highlight the Ignatian Values. There is a feeling of belongingness because the Jesuits and lay become a family ,sharing one vision and one common mission.We are companions with the Jesuits.

There is a sense of mutual reliance too between the Jesuits and the laity.They rely on us for smooth and effective working of the institution with co-operation and trust and we rely on them for personal and professional growth and nurturing our intellectual and spiritual needs .The influence and collaboration of the Jesuits doesn't stop here .As an active member in various committees at St.Xavier's Parish like the Parish family cell,women's commission,Liturgical committee,I get immense opportunities to empower myself under the guidance of the Jesuits and through me ,the torch is taken to the various parish families.

Sunday Homilies are spritual food for the faithful .The impact of the Sunday Homilies are evident in Christian families.We touch the lives of others in cooperation with many; the priests ,the religious,with their distinct charisms ,as well as people of all faiths and beliefs who seek to build a world of truth ,justice,freedom,peace and love .

The various programs conducted at the province level enriches and empowers us to become positive partners in tbe common Jesuit mission.

GC 35 states collaboration in mission which expresses our true identity as members of the church.

GC 36 recognizes the decisive role of the Jesuits partners in the vitality of the Society's mission today and expresses its gratitude to all who contribute to and play significant roles in the Jesuit ministry.

With this we come to an understanding that the Jesuit lay collaboration relies on the spirit of community among teaching staff and administrators .It is the way we welcome one another as colleagues in faith and the way we welcome the gift of others.

I still feel this concept of a common mission is new,there is a need for a growing understanding and careful planning. Efforts are made to achieve a true union of minds and hearts and to work together as a single apostolic body in formation of students ,we can still improvise on this.

Our concern should be the constant promotion of the Jesuit Legacy keeping in mind the Ignatian Values of Cura Personalis and Magis .

As the old staff members are getting superannuated ,It is very essential and call of the hour to equip  the new brigade who are not brought up with the background of the core of Ignatian Values...there is an ever urgent need to get some of the collaborators who understand the Ignatian Values , to mentor and guide the new staff members ...with the hope that they imbibe those core values in their own lives and eventually in the students .There is an urgent need to walk the talk otherwise there is a tendency that is increasingly noticable is that the staff members /collaborators are employees and the Jesuits are the employers. We have to set examples by being different from the public schools ,no matter how efficiently they are run.

The jesuits themselves understand the term collaboration differently. it all depends on the mental and spiritual make up of the individual leaders. some are more open to it and others are still in the old model.. .. i as a jesuit know  and you follow the instruction. yet there are others who would let the collaborators function urging them to go forward in creative fidelity as former general father Kolvenback would call it. Collaboration then will take a meaning very different from those executing the policies of the jesuits to making the mission as their own. thus the idea of collaboration has to further evolve. and this can happen when theJesuits would allow the collaborators to function with freedom and responsibility. they have to be there to urge them to promote creativity... new ways of responding to the fast changing world/society. this will make the collaborators to own up the mission. thus jesuits will have to assume more the role of animators/mentors rather than adminstrators.