The US Geological Survey measured the quake’s intensity at 7.5, and said the epicentre was in the province of Badakhshan in the Hindu Kush mountain range in Afghanistan’s far north. The quake occurred at a depth of 130 miles (210km).

Twelve students were killed in a stampede while trying to escape from their girls’ school in Taloqan in north-east Afghanistan, while six people were killed in the eastern province of Nangahar. A police official in Badakhshan said dozens of houses were destroyed in two remote and sparsely populated rural districts, with some damage reported in Fayzabad.

Power was cut across much of the Afghan capital, Kabul, where the quake was felt for about 45 seconds. Office workers ran out of their buildings, and houses shook, walls cracked and cars rolled in the street. Officials in the city could not be immediately reached as telephone lines appeared to be cut.

In Pakistan, fears immediately focused on communities in mountainous and isolated communities in the north of Pakistan, which were already vulnerable to landslides after two days of unseasonably heavy rain and snowfall.

Rescue officials said at least 28 people were known to have died in northern tribal areas, 20 in the north-west, three in Gilgit-Baltistan and one in Pakistani Kashmir. Two women were reportedly killed in a house collapse in Swat.

In Islamabad, the capital, buildings were shaken for more than two minutes, sending office workers running for safety. The scenes were repeated in other major Pakistani cities, including Lahore and Faisalabad. Some mobile phone users reported that networks had gone dead.

At least one building collapsed in a bazaar in the city of Peshawar. The main hospital there reported a rush of more than 100 injured people in its emergency wards.

Pakistan’s army was ordered to “carry out immediate rescue work in any affected areas without waiting for formal orders”. 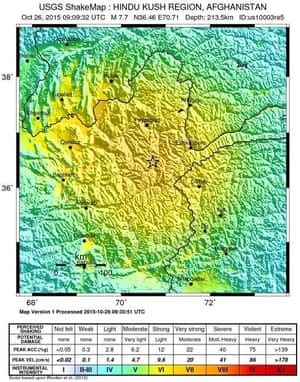 Map of the region in Afghanistan where the earthquake struck. Photograph: US Geological Survey/EPA

India’s northernmost region of Kashmir experienced intense and prolonged tremors that caused panic in areas that suffered severe flooding last year. Power supplies and most mobile networks were knocked out, and there was structural damage to roads and buildings. No casualties were reported, however.

The quake was also felt in the Indian capital, Delhi, though no damage was immediately reported. Office buildings swayed and workers who had just returned from lunch ran out of buildings and gathered in the street or in car parks.

The earthquake struck six months after Nepal suffered its worst quake on record, on 25 April. Including the toll from a major aftershock in May, 9,000 people lost their lives and 900,000 homes were damaged or destroyed.

The mountainous region is seismically active, with earthquakes the result of the Indian subcontinent driving into and under the Eurasian landmass. Sudden tectonic shifts can cause enormous and destructive releases of energy.