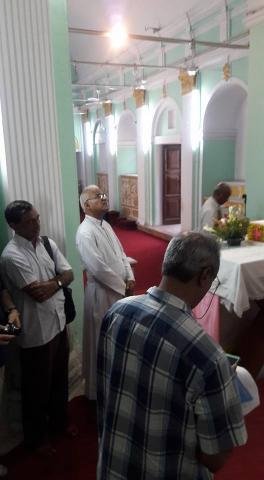 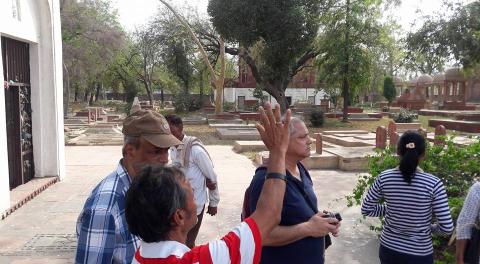 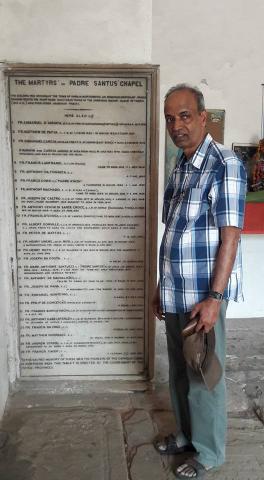 We, the POSA’s Curia community went for a day’s outing to Agra on the 2nd April. The purpose of the visit was to know more about the first Jesuits who were in Akbar’s court. We wanted to see the first Church built by the Jesuits with the help of Akbar. The visit was great in all its aspects. It was memorable, joyful, and gave a sense of Jesuit zeal, commitment, excellence and love for Christ. Thanks to the Arch Bishop Albert D Sousa, who went all out to welcome us and accompany us explaining the rich heritage of Jesuits in Agra Mission.

A Visit to the First Church in Agra

To all visitors, Agra is a Mughal city with the Taj Mahal as its focal point. However our search was to see the evidences of a Christian legacy through the Jesuits that is somewhat unknown to many. It is interesting to know the most significant Christian building in the city bears the somewhat enigmatic name of ‘Akbar’s church’, the Church of Pietà. Thanks to the Archdiocese and archbishop, for modifying the Church in its present form, keeping the original structure intact.

The story of this church dates back to February 18, 1580, on which date a delegation of three Jesuit priests reached Agra for an audience with Emperor Akbar. Portuguese Fathers Rodolfe Aquauiua, Antoine de Monserrate and Francois Henriques had made the long and difficult journey from Goa to Agra. Based on historical accounts, Akbar’s curiosity about different religions had caused him to invite priests from Goa. According to the historian RV Smith, the festival of Christmas would see the Emperor and his nobles come to the church in the morning, followed by ladies of the harem and young princes in the evening.

History tells us that Babur's grandson, Jalaluddin Muhammed Akbar, who occupied the throne from 1556 to 1605, consolidated Mughal rule over the whole of northern India, taking in Sind, Kashmir, Gujarat, Rajasthan, Orissa and Bengal, forming a partnership with the Hindu Rajputs to govern through a centralised bureaucracy with officers of state and provincial authorities under his personal direction.

Akbar always had a quest for Truth and Knowledge. He got the Holy Text of Mahabharata translated from Sanskrit to Persian. He took expressed interest in the religious beliefs of his subjects, especially that of the Muslims and Hindus. He enforced many reforms, including the edict of complete tolerance for all religions. From the mid1570s, he had instituted weekly religious discussions in a specially built structure called the Ibadatkhanch, house of worship. More open-minded than most contemporaries, he invited Islamic, Hindu, Christian, Jain and Zoroastrian scholars to religious discussions. His broad fascination with religions culminated in 1582, in the establishment of the Din-Ilahi, a syncretistic cult incorporating Islamic, Hindu and Christian beliefs.

The Indian mission of the Jesuits lies at the very origin of their Order. St. Francis Xavier, one of the first companions of St. Ignatius was sent to Indies and with that began the Jesuit mission in India. Francis Xavier was the first Jesuit to set foot on Indian soil on May 6, 1542. He took charge of the College of St. Paul in Goa started in 1541 by a group of Portuguese. Xavier worked in India for 10 years, from 1542 to 1552.  Wherever he went, he plunged himself into charitable and pastoral work preaching the message of God’s love to people. At the time of his death there were 64 Jesuits in India.

Jesuits at the Mughal Court

Akbar, the 3rd great Mughal ruler was a religious man, who, in the words of his son, “never for a moment forgot God”. Akbar got his first insight into the Christian character and religion from the actions of two Jesuits – Frs. Antony Vaz and Peter Dias, who had reached Bengal in 1576 at the request of the Bishop of Cochin. Akbar was greatly impressed by this news and curious about the religion, which insisted so much on honest dealings. Soon he sent for Fr. Julian Pereira, Vicar-General of Bengal in 1576, who in turn suggested that he should invite the Jesuits to his court.

In September 1579, Akbar’s ambassador arrived at Goa with a letter, asking for two learned priests to be sent to Akbar’s court. To quote Akbar’s letter: "... I am sending Abdullah, my ambassador, and Dominic Perez (an Armenian Christian, the interpreter) with the request that you will send me two learned Fathers and the books of Law, especially the Gospel, that I may know the Law and its excellence…" He wanted them to provide him and his Muslim and Hindu courtiers with first-hand knowledge about Christian faith.

The invitation elicited great hopes among the Goan Jesuits. The Provincial, Fr. Rui Viccente chose three Jesuits for the project. They were Fr. Rudolf Acquaviva (who later suffered martyrdom at Goa and was declared blessed) who led the mission, Fr. Antony Monserrate and the Persian born Br. Francis Henriques as his companions. They reached Fatehpur Sikri some 110 miles south of Delhi, via Surat and Gwalior on February 28, 1580 and were received with extraordinary warmth and affection by the emperor, whose attachment continued throughout the three years of the duration of the mission. After spending three years in the court, in 1582, Francis Henriques and Monserrate returned back leaving behind Rudolf who stayed for some more time. But in 1583, Rudolf too returned to Goa, thus ending the first Jesuit Mission to the great Mughal Empire.

MMagnificent Catholic Cemetery, where many Jesuits are buried

Fr. Anthony Monserrate is said to be the first Jesuit geographer in India. When the team left Goa for the Mughal mission, he was asked to keep a diary of all events, which he did faithfully, adding greatly to its value by his geographical and astronomical observations. On his journey from Surat to Fatehpur Sikri in 1580, he made a survey and took observations for latitude. When Akbar marched to Kabul in 1581 against his half-brother Mirza Muhammed Hakim, he took Fr. Monserrate along for continuing the tuition of his second son Murad. Akbar encouraged Fr. Monserrate to take observations en route. He, however, showed no interest in the data collected by Fr. Monserrate who kept it with himself even when he returned to Goa. Later in 1804, Francis Wilford of Bengal Engineers made use of Fr. Monserrate’s manuscripts to prepare a valuable map of the countries west of Delhi.

The first Jesuit Mission, brought about a better understanding and dialogue between Islam and Christianity. Art, literature, and history, in India as well as in Europe, benefited by the presence of Jesuit missionaries at Akbar's court. It marked a serious inter religious dialogue in India, which even today Jesuits continue to do.

In 1591, a second mission consisting of Fr. Edward Leitao, Fr. Christopher de Vega and Bro. Stephen Riberio arrived at Lahore on Akbar’s invitation. But it lasted less than a year. The Jesuits soon felt that they were engaged in a futile task and feared that Akbar was manipulating them for his own ends.

Fr. Provincial stands near the plaque in which numerous Jesuit martyrs names mentioned

Once again after a gap of 13 years, Akbar’s earnest efforts to obtain a replacement were rewarded. In May 1595, Fr. Jerome Xavier (grand nephew of Francis Xavier) accompanied by Fr. Manuel Pinheiro and Bro. Bento de Goes arrived in Lahore on a third mission. This time Akbar gave them permission to open a school and to build churches at Agra and Lahore. Akbar commissioned Fr. Xavier to translate the Life of Christ into Persian as the Dastan-i-Masih. This was completed in 1602.

The Jesuits enjoyed the patronage of Akbar and his son Jahangir; but under Shah Jehan and Aurangzeb this disappeared. Akbar also married an Armenian Christian, Mariam Zamani Begum. Mariam’s sister, Lady Juliana was the doctor of the royal harem. Juliana was given in marriage to Prince Jean Philipe de Bourbon of Navarre of the royal house of France. It is said that Juliana built the first Church at Agra. Akbar had an adopted son, Mirza-Zul-Qarnain (Zulcarnen), first son of Mirza Iscandar an Armenian who was a cavalier at Akbar’s court. Mirza-Zul-Qarnain was the founder of the Jesuit College at Agra.

He was brought up in the palace Queen Mariam, and grew up as the brother and playmate of Jahangir and Shah Jehan. His rise was fast. He was the Governor of Sambar, Mogor, Babrich (Oudh), Lahore and Bengal. Both Jahangir and Shah Jehan had affection for him, appreciated his administrative ability and respected his staunch faith and virtuous life. He was a genuine Christian and was in very good relations with Jesuits Fathers. He built a Church in Mogor and promoted Christianity. He always helped the Jesuits by donating funds. He gave them a large sum of money to purchase a land in Salsette(Mumbai), to the College in Agra and to establish a mission in Tibet.

He freed them when they were imprisoned. On all solemn feats of the year, he would send to the Jesuits large sums of money to be distributed as alms among the poor Christians. He won the admiration of the Jesuits Fathers, and they have left glowing accounts of him. One recod refers to him as the “Father of Mogor Christians” and the “Pillar of Christianity in India”.

Shah Jahan had conflict with the Portuguese so Jesuit fathers were also persecuted. Their release in 1635 was subject to the church being pulled down, which was done – only to be reconstructed in 1636 at the same site. The next blip in the life of the church came when Ahmad Shah Abdali’s troops ransacked the place. In 1769, however, it found another patron in the form of the European adventurer Walter Reinhardt, who helped to rebuild and extend the church. His wife, later known as Begum Samru, was probably baptized in this church.

Arch Bishop shows us the name of Walter Reinhardt. His Grave too is here to see

Rapid increase in the number of faithful led to the construction of a new church in 1848. This building, standing close to Akbar’s church and dominating what is now a large complex of church buildings is the imposing Cathedral of Immaculate Conception. Possessing a Baroque exterior at its front, the cathedral from within resembles a magnified version of Akbar’s Church with the same curved ceiling effect, the difference between the two places of worship being the altar. The cathedral today serves as the seat of the Catholic Archdiocese of Agra.

Our visit was indeed a pilgrimage. It was apt that we decided to go there to explore the great presence of the Jesuits in the Court centuries ago. We felt the Jesuit Magis everywhere.  In the words of Fr. George Pattery SJ, Provincial of South Asia, “the tour was indeed an eye-opener. There is a lot more to explore about the Jesuit contributions during the time of the great Mughals”.  With great satisfaction and a sense of gratitude to God we returned from Agra. Hope the exploration will go on by many more Jesuits in the coming days.